Elizabeth was born then baptized on October 22,1786 in the Bern Church in Berks County, Pennsylvania. The Bern Church was a German Reformed Church. Elizabeth was a 2nd generation American, her grandparents migrated from Germany. Berks County, PA was a farming community 20 miles NE of Philadelphia. Around 1814 Elizabeth married Henry Miller, he was from Pennsylvania too. Their first son John was born in Pennsylvania, then the family was in Stark County, Ohio by 1820. Elizabeth’s dad Johann and mom Anna Kryder and siblings all moved to Stark, Ohio. In Stark, Elizabeth and family were members of the Holy Trinity Lutheran Church and at least 3 children were baptized there. Elizabeth’s sister Magdalena was a sponsor at a baptism. From the book, Portrait and biographical record of Stark County, Ohio, in the bio about son William Miller, “The maiden name of our subject’s mother was Elizabeth Freiberger, and she was a native of Pennsylvania. By her union with Mr. Miller she became the mother of fifteen children, twelve of whom grew to mature years. She preceded her husband to the better land, dying when only thirty-eight years of age.” 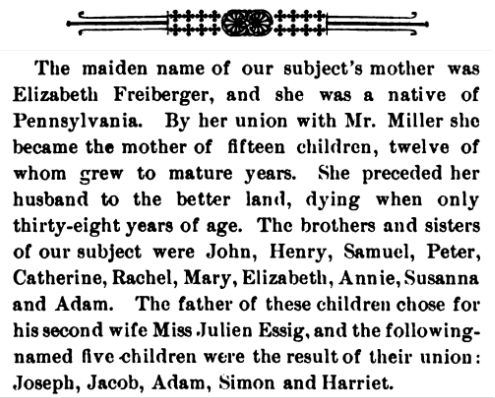 Elizabeth probably did not have 15 children, probably closer to 12, with 8 living beyond childhood. Elizabeth did die at age 38 in 1835. She is buried in Maplegrove Mennonite Cemetery Stark, Ohio. The Find a Grave memorial has no photo of her headstone but an inscription and description, ” 38y 21d (Broken Stone-Name missing)”.

Ludwig Freyburger was born in 1743 in Baden, Germany. He arrived in America on ‘The Hero’ October 27, 1764 and took an oath to the ‘Province and State of Pennsylvania’. He probably fought in the American Revolution, shown by a marker at his headstone, no records found yet to prove this. In 1786 he paid taxes in Northumberland, Pennsylvania on: 50 acres of land, 1 horse, 2 cows, valued at  $13, state tax was 0 pounds 2 shillings 2 pence. In 1790 he is on the country’s first federal census living in Northumberland. PA with his wife, 4 sons and 2 daughters. Ludwig and family moved to Goshen, Ohio around 1800. Ludwig died there in 1802 and is buried in Myers Cemetery, Goshen, Ohio. His headstone has him as the first burial in this cemetery. He shares a headstone with his wife Mary. There are several Freyburgers buried in this cemetery.

This work is licensed under a Creative Commons Attribution 4.0 International License.
Thrilled to share my findings, use as you like, facts provided are correct and current when posted. Sources are provided, most all that I use from HathiTrust, Archive.org, Library of Congress, New York Public Library Digital Collections are in the public domain, out of copyright. All that I use from Ancestry and FamilySearch are owned by them, not me.

As of 2019, copyright expired for all works published in the United States before 1924 … [meaning]  … you are free to use in the U.S. without permission.

Searching for exact copyright guidelines is like a maze, maybe nobody really knows?, this site makes it fairly clear: Copyright and fair use at Stanford.edu.