Clyde, Edith and Philippa’s grandma Delia Angell Flood was the sister of Elmer’s dad Charles Angell. The Flood and Angell families would have gotten together for picnics and holidays. Clyde and Elmer Angel were close in age, so were Philippa Mockford and Edith Flood. 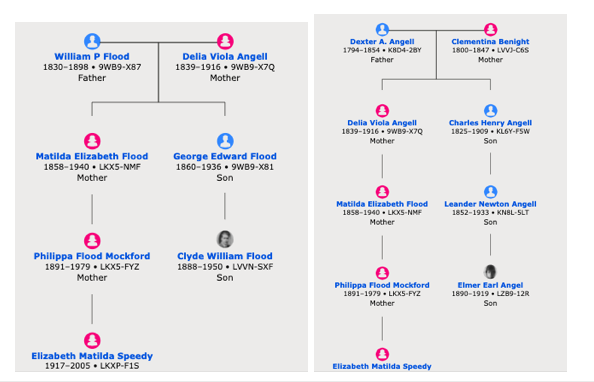 Clyde grew up on a farm so he would have helped his mom and dad with chores, planting, crops, livestock. At the 1905 Butler County Fair, Clyde won premiums for flowers he raised including a first place for Dahlias. Clyde and Elmer Angell both fought in World War 1. Clyde enlisted in 1917 and served 17 months in the Iowa 95th Aero Squadron, promoted to Corporal . “The squadron was initially formed in early August 1917 at Jefferson Barracks, Missouri, where 150 civilians were sworn into the United States Army as soldiers. The newly-sworn in men were sent to Kelly Field, Texas, where they arrived on 19 August and were organized as the 95th Aero Squadron.” Elmer died in the Meuse–Argonne battle, in France, 1918.

Clyde came home in May, 1919 via the May 7 Clarksville (Iowa) Star newspaper. “Chas. Thomsen and Clyde Flood arrived here Sunday morning having received their discharge from the army after service over seas.” Though 1920-21 Clyde was active in getting a Butler County post for the American Legion. December 15, 1921 he was elected Sergeant at Arms. September 25, 1924 via the Clarksville (Iowa) Star newspaper, “Iving and Milo Isaacson, Clyde Flood and Dave Kramer drove to St Paul the first of the week where they represented the Allison Post of the American Legion at the National Convention. They returned last week and report having a find trip and a mighty good time at the convention”. 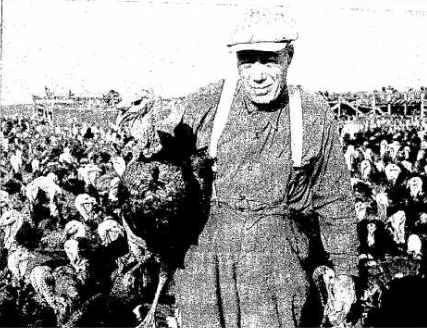 Clyde found work at a turkey farm after he returned from the war. Mr. Nicholas, the farm owner, had a broken electric fan. Nichols was ready to throw it away- Clyde was looking for work, asked to look at the fan ‘from an old battery he got enough material to start’ then fix the fan. Clyde stayed at the turkey farm for 20+ years. In 1944 the Mason City (Iowa) Globe Gazette had a story about the Nicholas farm and all the birds being shipped overseas for the the World War 2 soldiers Thanksgiving Dinner. Clyde is featured in the story, he was 56 in 1944.

John was born December 3, 1887 in Minneapolis. He was the son of Anson and Bertha Wait Montgomery. Howard, John’s middle name, was his paternal grandma’s maiden name. John, his parents and brother Tracy Wait Montgomery lived in Minneapolis where Anson was a printer,  then by 1910 they were in Butterfield, Missouri. John graduated from the University of Missouri with a degree in Education and French language. In 1913, 1924, 1927, 1929 and 1932 he sailed to France for the summer. In 1918 he started his teaching career at Mercersburg Academy a private school in Pennsylvania, it’s still there. He taught French and was head of the French department when he retired after 40 years and moved to Madrid, Spain.

He lived in Spain for a couple years then died June 17, 1960, he was 72 and had heart disease and maybe lung disease. The Reports of Deaths of American Citizens Abroad, 1835-1974, a record at Ancestry is a sixteen page document verifying his death and burial and listing his possessions. His inventory included a pocket watch, a pocket knife, an Olivetti “22” portable typewriter, a Philips radio-record player and a family photo.

John is buried in Madrid at Saint Isidore Cemetery, Cementerio de la Sacramental de Santa Maria, Patio de la Concepcion, Section 8, row 4, No. 10 is written on his death record. The cemetery has an incredible history and is “one of Europe’s most interesting graveyards”. The lion photo is one of thousands of headstones or sculptures at the cemetery. 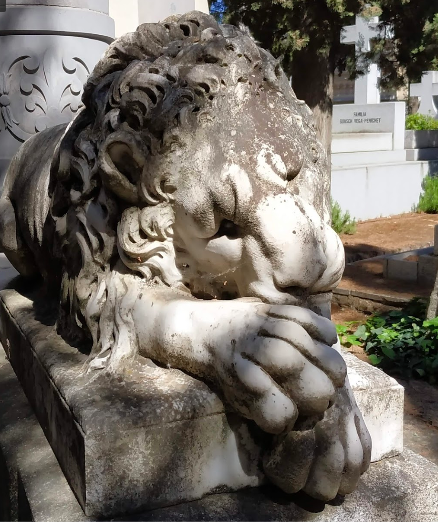 John Cable was born March 22, 1847 in Somerset, Pennsylvania. His dad is Jonathan Cable his mom is most likely Eliza Frey, who died when John was about 5, his 2nd mom was Charlotte Knapp.

John lived in Pennsylvania, then his family moved to Jefferson, Wisconsin. By 1860 John was in Pleasant Grove, Floyd County, Iowa, living on a farm. In 1880 he was in Edson Wisconsin, a railroad contractor. John owned a home, maybe a boarding house. His brother Chancey and sister Sarah’s family lived there too.

The house could have been known as Cable’s Railroad Camp?. The 1880 census sheet is handwritten, hard to read. Anyway John was the contractor, his sister Sarah, her husband Horace Towslee and daughter Ethel, Cable brother Chancey, along with a cook, a servant and 20+ laborers lived in the home.

By 1885 John was in Minnesota. ON February 13, 1890 he married Frances Allen in Ramsey Minnesota. Their child Chauncey was baptized September 4, 1891 in St Paul at the St. Paul Goodrich Avenue Presbyterian Church.

John lived in Wisconsin, Minnesota and Seattle, Washington. His last 20 years he lived in Chicago where he died. John’s funeral was held at his brother William’s home in December 1924 and he’s buried in Pleasant Grove Cemetery in Pleasant Grove, Iowa probably near his brother William, John’s headstone not yet found. The obituary was in the December 10, 1924 Iowa (Greene) Recorder. “For the past twenty six years he has made his home in Chicago, Ill. working at his trade as an inventor. Mr Cable was not a member of any church but had a Christian heart and was a generous giver.” 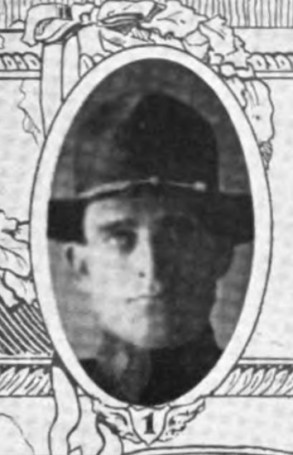 Elmer was born February 17 1890, the first and only child of Leander and Nancy Trobaugh Angell. On the 1900 US census Elmer was 10 years old, and in school. On the 1910 census he was a laborer and worked odd jobs with 0 weeks of not working. In 1917 Elmer was 27 and drafted in to World War 1. Elmer registered in June of 1917, with all men between the ages of 21 and 31. The draft card description: single with no dependents, automobile mechanic by trade, unemployed, medium height and build with blue eyes and brown hair.  In August of 1917 Elmer married Ella Tibbits in Albert Lea, Minnesota.

Elmer was one of the ’73 Registrants to Answer Roll Call in Allison’, to fill the quota from Butler County printed in the February 20 1918 Iowa (Greene) Recorder. The front page shows the 73, gives some facts about the 6,000,000 + men already dead in the war and includes SCHOOL NOTES: The High School are observing Na­tional Song Week by singing ‘America’ and ‘The Star Spangled Banner’ whenever the entire student body are together. 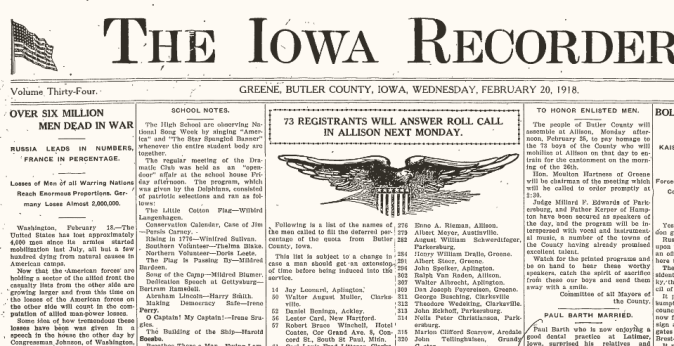 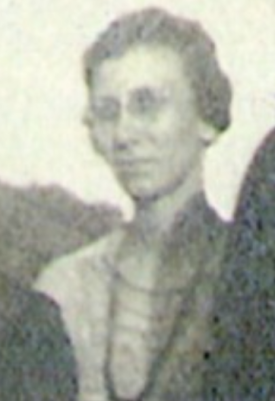 Five days later on Feb. 25 there was a patriotic rally. In May of 1918 Elmer was in Camp Logan Illinois, then in France by May, 1918. Private Angell served with Company D, 129th Infantry, of the 33rd Division. The 33rd Division was part of the Meuse-Argonne Offensive in France. Elmer was one of 26,277 American soldiers killed in this battle. His funeral was December 18, 1918 with burial (some time later) in Antioch Cemetery in Clarksville, Iowa. 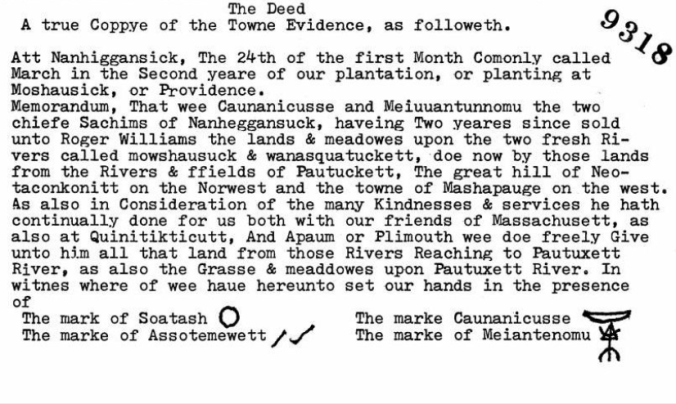 In 1636 Boston courts decided  Roger Williams had to return to England. He was creating problems in the colony, accused of having diverse thoughts. Roger encouraged freedom of religion, ‘soul liberty’, a separation of church and state. He would ask the courts and churches to explain how stealing lands from the native Americans fit in with the beliefs of the new colony. As the colony prepared to export him, Roger Williams fled in the night. He headed down river to present day Providence, Rhode Island. With help from the Narragansett tribe he founded a colony based on his beliefs. March 24, 1638 the first land deeds were signed by the native people selling the lands and witnessed by Roger Williams and Benedict Arnold (Gov’r not American Revolution soldier).

Years later Roger’s son Daniel said, “Can you find such another now alive or in this age? He gave away his lands.” It is pretty amazing for those times and anytime: Roger owned all that land, legally and he thought, ethically purchased, but he didn’t keep the lands he shared them. He wanted the new Providence Plantation to succeed so he started deeding land to his friends and followers and they all started working on building a place built on Roger’s ideas. 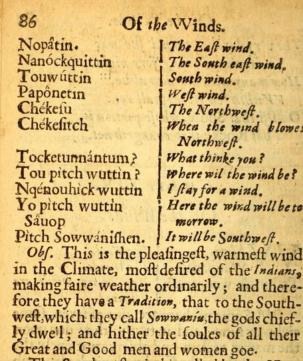 Direct descendancy from Roger Williams is pretty well proven through Dexter Angell (VII 1.) who mentions daughter Delia in his will. Delia is the bonafide mom of Matilda Flood who married Richard Mockford and they are parents of Philippa Flood Mockford Speedy, aka great grandma Speedy. Roger Williams of Province, RI by Anthony, Bertha Williams at HathiTrust this same book is used by the Roger William Family Association as a source. 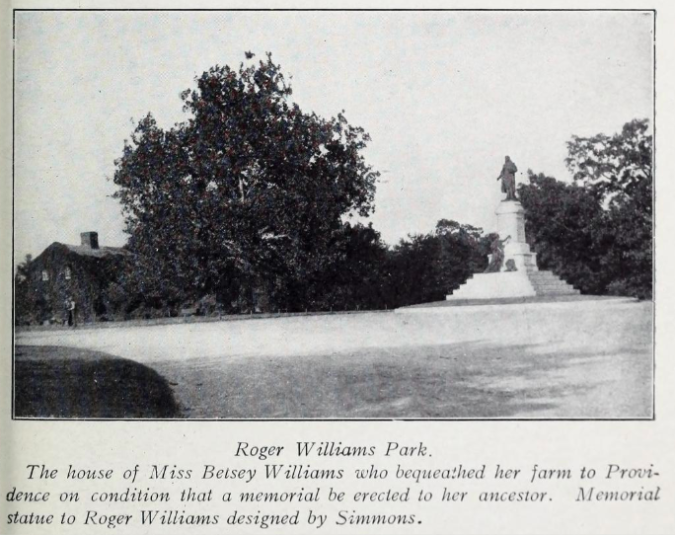 In 1871 Roger Williams’s 3rd great granddaughter Betsy Williams donated 100+ acres of land to the state of Rhode Island with the condition that it be used as a public space for everyone and have a statue of Roger Williams. There is actually a book saved about this whole event, Ceremonies at the unveiling of the monument to Roger Williams at HathiTrust

And the People’s Park

Allen Preston Gaines was born September 25, 1900 in Wadena, Minnesota, the oldest child of Charles and Mary Trewie Gaines. Allen and his family were in Lane, Oregon when Allen was 10 years old, then in Everett, Washington by 1920 when Allen was 20. Allen married Mary Ingram April 4, 1925, they settled in Boise Idaho, raised a family then in later years moved back to the Everett, Washington area where both are buried.

Allen was an apprentice mariner on the SS Emergency Fleet Corporation at the Port of Seattle and has a record: Applications for Seaman’s Protection Certificates, which includes a photo, thumbprint, physical description and identifying details, including tattoos if any. This application was a passport and provided protection on sea voyages from -forced recruitment by navies of other nations-. The Protection Certificates began in the American Revolution, disappeared for a while, returned around WW 1 then were obsolete by the 1940s, more at Wikipedia: Protection papers Faber was born on February 23, 1899 in Stark County, Ohio to Ivy and Elta Combs Druckenbrod. Faber was the nephew of Fianna Druckenbrod, mother of Lola Miller. Lola and Faber were cousins. 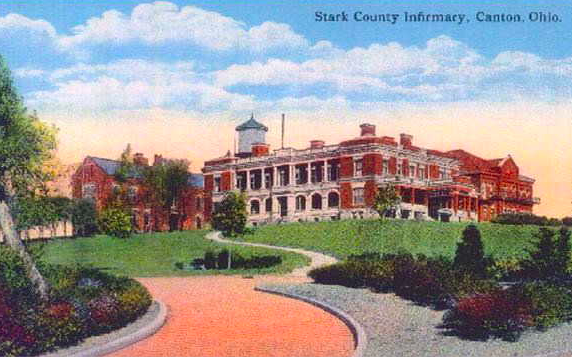 Faber’s dad, Ivy was Superintendent of the Stark Infirmary. The family lived at the infirmary, a huge stone mansion, when Faber and his brother were kids. Ivy died in 1916 and his widow Elta began traveling. In 1920 Elta sailed from Key West, Florida to Cuba. In 1924 she sailed from New York to Cherbourg, France. Elta and Faber made this European trip together with Faber staying longer in Europe. The photos are from their passport applications. 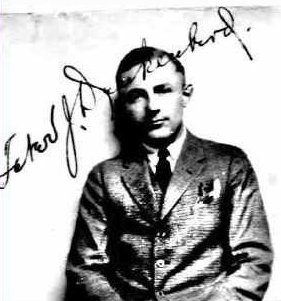 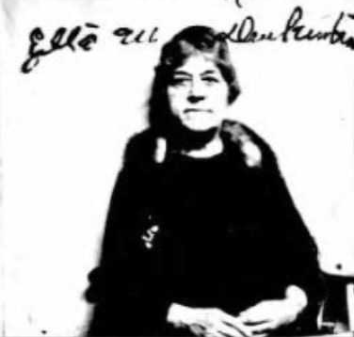 In 1939 Elta, Faber and Faber’s fiance Grace, visited Greene, Iowa. They spent a weekend with Lola Miller and her husband William E Miller. William and Lola had a son named Faber, it’s a pretty strong probability that Faber Miller with his wife Gladys Cable Miller, shared a dinner on Friday night September 29, 1939. Faber and Gladys named their first son Faber, too.