Maria Anna Kryder was born in 1770 in Berks County, Pennsylvania to John & Anna Fuchs or Fox, the 2nd of 5 kids. In 1790 Maria married Johann Fryberger and by 1800 Maria and Johann had 3 kids and were on the census in Centre County, about 147 miles west of Berks County, PA. In 1810 Maria and Johann had 7 kids and lived on a farm in the same area. Maria’s brother John and his family were nearby.

The 1820 US census has Maria with Johann and kids in Stark County, Ohio. Along with Maria’s brother John Kryder and family and hundreds of others from Pennsylvania they moved 200 miles further west to Stark, OH. Maria’s parents and other siblings stayed in Pennsylvania. Maria’s daughter Elizabeth Fryberger married Henry Miller. Their son Peter Miller and his wife Esther moved 700 miles further west to Bremer County, Iowa, their great grandson was Faber Miller my grandpa.

Elizabeth, daughter of Maria and Johann

Maria was a widow in 1845, she was 75 years old. Maria lived to age 81 she died in 1851. Both she and Johann are buried at Maplegrove Mennonite Cemetery in Hartville, Stark County, Ohio, USA.

John or Johann was born in France, Germany or Pennsylvania on or around April 22, 1736, sources vary. By 1767 he was definitely in Pennsylvania where he married Ann Maria Fuchs or Fox. John and Ann had at least 5 children born between 1768 and 1775 in the area of Lancaster, PA.

John and family were part of the German American Pennsylvania community. During the American Revolution they were in the Big Runaway of 1778: “The Big Runaway was a mass evacuation in June and July 1778 of settlers from the frontier areas of what is now north central Pennsylvania during the American Revolutionary War.” The locals knew of the dangers because of the war, had requested aid: rifles, armed men from the Continental Congress, none of it arrived in time. So everyone fled with livestock and whatever possessions they could carry. Books and movies could be made about this one event, it’s huge and lasted through 1779 when the American gov’t committed more aid to “security of the frontier”. 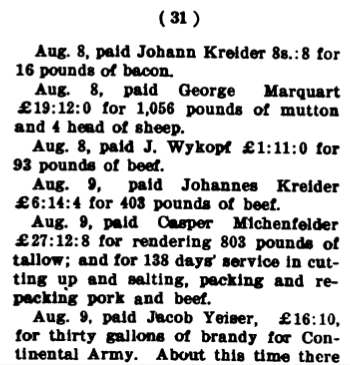 Catherine was born May 8, 1775 in Lancaster County, Pennsylvania to John and Anna Maria Fuchs/Fox Kryder. Parents John and Anna both migrated from Germany and married, raised their family in Lancaster, PA, “By 1775, Germans constituted about one-third of the population of the state.” [At Wikipedia with sources.] Catherine was the youngest in the Kryder family. Her older sister Anna Maria married Johann Fryberger and they left for Ohio where their daughter Elizabeth married Henry Miller and their son Peter moved on to Bremer County, Iowa where his son William had a daughter Lola, mom of Faber Miller.

Catherine’s parents and siblings and her husband and children are recorded in Lancaster, Pennsylvania, Mennonite Vital Records, 1750-2014. These are individual index cards, 1000s of cards, typed up to track local family histories. The cards are part of the Lancaster Mennonite Historical Society, still in Lancaster, PA right next door to the Tanger Outlet Center. Mennonites are/were an Anabaptist group committed to peace and pacifism, following the ministry of Jesus. Mennonites were named for Menno Simons of Friesland, Netherlands who was a contemporary of Martin Luther and other Protestant leaders. A person could spend months learning about the history of and current Mennonite religion.

Back in PA, Catherine married Michael Hess in 1795. Catherine and Michael had 11 kids, 9 stayed in Pennsylvania, son Benjamin left for Kansas, daughter Anna left for Illinois. Michael was a soldier in the American Revolution. The only record, so far, of his service is a veteran’s burial index. One of his soldier benefits may have been the chance to buy land. In 1818 Michael bought 100 acres of unimproved land from the US gov’t at 10 pounds per acre. Michael and Catherine with their family and, probably, helpful neighbors would have turned this unimproved land into a homestead and farm, with their hands and tools, machinery of the 1800s. They would have built up a house, barns, fences, water wells, chairs, beds and hundreds of other things.