Hannah Smith was born on June 24, 1711 in Glastonbury Connecticut. Her parents were Gershom and Hannah Judd Smith. Hannah had one confirmed brother, Gershom Jr who died at age 14. There may have been other siblings, with no records to show this.

On September 24, 1729 in Glastonbury, Connecticut Hannah married Richard Risley. They had 11 children. There is a pubic shared photo of the youngest child, Richard O. Risley. Hannah and Richard’s children settled in Vermont, New York, most stayed in Connecticut, Benjamin went to Ohio.

When Hannah died on December 2, 1785 she had more than 30 grandkids. She had a tragic death at age 74, “of a fall into ye fire”. Hannah and Richard share a gravestone and are both buried at Quarryville Cemetery in Bolton, CT. The cemetery is off the Boston Turnpike, next to the Bolton United Methodist Church, in the middle of Connecticut. In the same cemetery is Hannah’s daughter in law Sarah Smith Risley, wife of Benjamin. Sarah died in 1777 of ‘child bed fever’ at age 33. Sarah’s headstone is intricate and inscribed with: A mournful sight for to behold. Our dearest friends turned into mould. But when we do think of their? dust? Think it will be so with us.

Gershom Smith was born on November 30, 1679 in Hartford, Connecticut. Gershom’s dad Johnathan came to America from England around 1640, his mom Margaret Bushnell was born in Salem, Massachusetts.

Gershom married Hannah Judd: “Gershom Smith of Glastonbury and Hannah Judd the daughter of Benjamin Judd of Farmington was married on the 4 day of May announced Dom 1710.” They had 2 children, a son Gershom Jr who died young and a daughter Hannah who married and had a family. Gershom’s older brother Richard wrote a will in 1725, on Valentine’s Day, that named younger brother Gershom as executor (manager) of the estate. Richard never married, had no kids. Gershom died before Richard so Richard ’s estate went to court on 6 June, 1749. Gershom’s daughter Hannah had married Richard Risley who was named executor of his wife’s uncle’s estate.

Gershom died August 28, 1747 in Glastonbury. His widow Hannah went to live with daughter Hannah Smith Risley and her family. Gershom, with his son are buried at Green Cemetery in Glastonbury.

Hannah was baptized in Leicester, England on September 6, 1612. She probably sailed to America with her parents and then definitely married Edward Mellows by 1636. Then lived in Charlestown, Massachusetts. Hannah was a widow in 1650 and in 1651 she married Joseph Hill, they had children and lived in Boston and Malden, Massachusetts. In May of 1653 Peter Bulkeley, brother of Martha (Hannah’s mother in law from first marriage) helped Hannah with the estate of her Mellows children.
“[345.] Mr Joseph Hills, with the consent of Hanna, his wife, and Mr Peter Buckley [*345.]
Buckley, theire vnkell, offering a petition for the confirmation of the sale of a howse and certayne lands, sould by his wife in the time of her widdowhood, hath his request graunted ; as also power is hereby giuen and granted to the petitioner to make sale of such land as yet remaynes vnsould, by the consent and advice of Mr Buckley, pvided satisfaction be made to the children of Mr Mellowes according to what the land shalbe sould for about what it is prised in the inventory.”

Massachusetts. General Court. Records of the Governor And Company of the Massachusetts Bay In New England: Boston: W. White, printer to the commonwealth, 1853-54. http://tinyurl.com/y5rjyf86

Naomi Smith 7th great grandmother on RootsMagic tree.
Naomi was born October 28, 1720 in Providence, Rhode Island. Her parents Israel and Elizabeth Arnold Smith and ancestors lived in 1636 RI.  Naomi married Oliver Angell- his family also of 1636 RI. Naomi was a teacher, ‘She had the satisfaction of knowing that her boys and girls were all unusually intelligent.’ Page 9. Israel Angell Colonel of the 2nd Rhode Island Regiment at HathiTrust. She’s described as a ‘small alert woman with remarkably keen dark eyes’. Naomi and Oliver had seven children and this Angell family lived right through the American Revolution. Naomi’s son Israel was a Colonel, son Hope helped with the draft. Naomi would have been part of the Homespun Movement. Americans tired of taxes on English imports, began protesting these imports, this included cloth. So before and during the war women upped their spinning and weaving to produce clothing, bedding, textiles, yarns  for their communities and the troops. 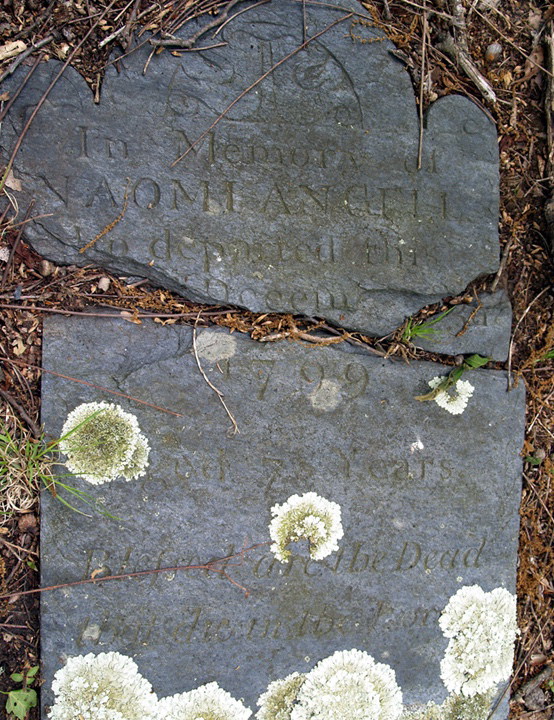 Naomi and Oliver both died in 1799, same year as George Washington. Naomi and Oliver are buried in a cemetery known as Rhode Island Hist. Cemetery North Providence #8, the Hope Angell Lot, or the Oliver Angell Lot. The cemetery was originally on an Angell farm and is now in a residential area between two houses. Photo shows the location on Google Maps. GPS coordinates: 41.8733900, -71.4574900 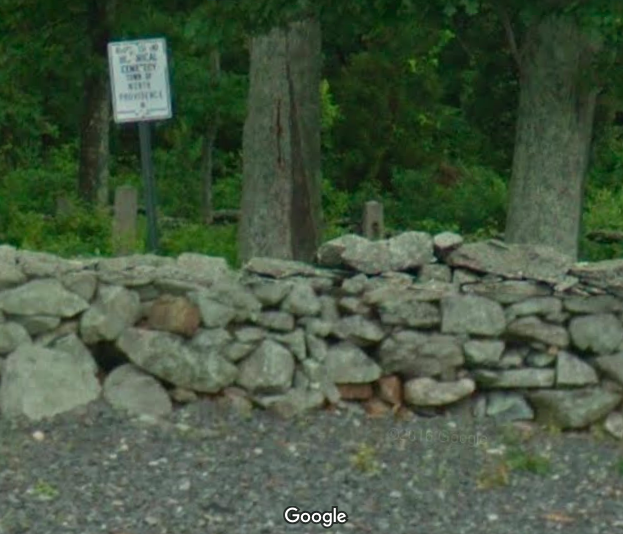 John Smith was born in England, around 1598. In England he married Alice her last name unknown. John was in Dorchester, Massachusetts by 1634 and by 1635 he was ordered to leave because ‘dyvers dangerous opinions’. At about the same time in Salem, Massachusetts Roger Williams had the same contrary views that didn’t align with the people in power. Roger had to return to England and maybe have a trial or meeting with superiors. 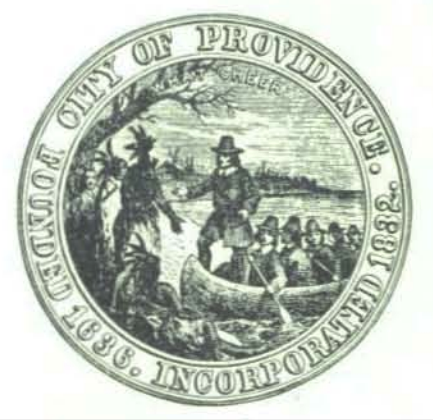 The story is Roger escaped in the night in a canoe and with 4 others they made their way to a spot, connected peacefully with the native people and founded Providence, Rhode Island. The seal of Providence shows this event. In 1636 John and the others had built their homes and begun organizing. John was a miller and given a land to build a mill. He operated the mill agreeing that every 2nd and 5th day of the week the mill was reserved to grind corn for the town. John was a town clerk in 1641 so his name is on deeds and wills and laws passed. He probably died in 1648 and his will (not yet found) leaves the mill to his son and widow. The town council OKed this as long as Alice and John Jr provided good service, as John Sr. had, they did.

Seal of the city of Providence Rhode Island at Wikipedia

In Colonial Connecticut a 2 mile strip of land was part of ongoing land disputes. In May 1668 Lyme was incorporated, New London, Connecticut was already a town, when the Court made a judgement on the land: that it would be ’ministry land’ for the town ministers, one side for Lyme, the other for New London. Men from New London protested and accused their leaders of not truly representing the people. The 1668 Court ruling held, until August of 1671. 30 men from New London set out to mow the ministry land, they were met by a group of men from Lyme planning to mow their minister’s land, and the riot started. The Lyme constable put New London men in prison, the New London constable put Lyme men in the town prison. After a while leaders met and “drinking a dram together with som(e) seeming friendship, every man departed to his home” and decided to let the Courts again make a decision about the continuing land dispute. March 1672 the Court charged and fined men for rioting. From New London: Samuel Tubbs (father of Isaac Tubbs) and Isaac Wiley (grandfather of Isaac Tubbs). From Lyme: John Huntley and Richard Smith (grandfathers of Marah Smith). The court fined each town, but the Court eventually forgot about the fines or paid the fines and the disagreement just sort of died out.

John Smith, the Miller, of Providence Rhode Island, some of his descendants by Charles Farnham page 114, image 11 of 19

Ordered, that John Smyth shalbe sent within theis 6 weekes out of this jurisdiccon, for dyvers dangerous opinions, wch hee holdeth, & hath dyvulged, if in the meane tyme he removes not himselfe out of this plantacon Jn Smith banish’t

Elizabeth outlived 2 husbands, she died at 74 in 1758. She left specific items for her daughters and granddaughters. Naomi Smith Angell inherited a Square Table and five pounds old Tenor. Daughter Elizabeth gets the Long Cloke, Deborah gets the Kettle and divides the featherbed with Ruth. Elizabeth’s will directs that her best buttons are for her granddaughters, “My will is that my Grand Daughter Elisabeth Hopkins have my large Silver Sleeve Buttons. Item, I give my Grand Daughter Martha Smith my Small Silver Sleeve Buttons, my looking Glass.” Elizabeth’s will is transcribed at Rhode Island USGenweb, last will towards bottom.