Newly added John Crandall (10th great grandfather) was a Baptist elder, very vocal in his beliefs and ideas of fairness. He was summoned and fined by the courts for holding religious meetings, resisting authority, sedition and rebellion. Oddly he was also Deputy Commissioner and Statesman. In 1661 Crandall purchased land from the Narragansett tribe in Rhode Island. This tribe’s language was studied and recorded by Roger Williams in his book A Key Into the American Language. 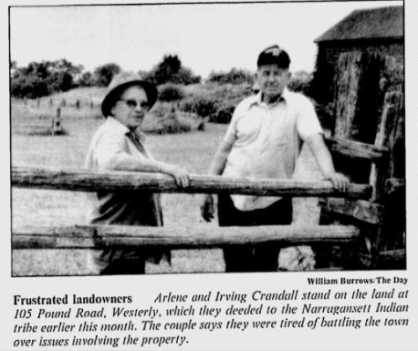 Forward to 1991, Crandall descendants Arlene and Irving Crandall return the land  (about 350 acres) to the Narragansett tribe. The 1991 Crandalls were behind in property taxes and nervous that the marshland, forest and swamp would be auctioned off  then developed into concrete, buildings and things. So the Crandall’s returned the land to the local tribe. Full story here: Taxes got too high they gave it back to the tribe.