John was born around 1800 in Mylor Cornwall England. He married Philippa, last name unknown, around 1820. John and Philippa stayed in the Mylor area and had 7 kids: 5 daughters and 2 sons. Their children were baptized in the local church from 1827 to 1840. John was a gardener, Philippa would have managed the house.

John died then was buried on September 25, 1856 he was 55. John may have known about his grandson Richard Mockford born on September 21, 1856 but probably not, news traveled way slower in 1856. John’s grandson Richard Mockford left NY for Iowa where he married Matilda Flood and they named their daughter Philippa after Richard’s mom and grandma. Great granddaughter and the 3rd Philippa married Harve Speedy, their first child was Elizabeth Speedy. 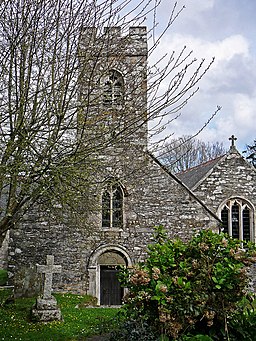 Philippa Johns was born in Cornwall England, September 1828 and was baptized November 2, 1828 in the Mylor parish church. In 1851 Philippa was a servant in the home of Richard and Elizabeth Green Mockford. Richard and his son Henry were millers or flour makers: Richard a foreman, Henry a journeyman. Philippa married Henry Mockford in 1853 in the same Mylor church.

Henry sailed to America in 1854 on his own as husbands did, to set up a home, then once established send for Philippa. In the summer 1855 census Henry was a border in Clarkson, New York. On November 19, 1855 Philippa and oldest son 2 year old William arrived. The family lived in northern and northwestern New York: Batavia and Clarkson. When Philippa died in 1903 her husband, four sons and three daughters lived on. Philippa’s name like her granddaughter’s name is spelled different ways.