Jacob was born in 1808 in Virginia. On April 18, 1833 in Jackson, Ohio he married Sarah Davis, also from Virginia. They had their first child in Ohio then moved to Elkhart Indiana and had 9 more kids. The 1840 and 1850 US censuses show Jacob and family farmed in Baugo Township, 50 miles east of Lake Michigan, near Elkhart and South Bend, Indiana The red rectangle on the Google map shows the location. The Mitchell family from New York were neighbors in 1850 and on August 7, 1850 Jacob and Sarah’s oldest daughter Mary married Moses Mitchell and they moved to Iowa.

Jacob died in 1854 at age 46 and there’s a pretty good chance he was hit by a train after a night of drinking. The newspaper article (Peru (Indiana) Wabash Valley Olio 1854 Jan 13) shows detail. In 1845 the ‘Temperance’ lobby, movement was pretty well established and continued to grow until prohibition in 1920. When Jacob died, his widow, with 8 kids still at home, one of them just born in 1854, decided to move 400 miles west to Iowa, where her oldest daughter Mary Mitchell and family lived. That move set in motion the marriage of Sarah’s son James to Mary Ella Gaines then the birth of their son William, then William’s marriage and the birth of his son, Faber who married Gladys. Faber’s sister Florence kept family history notes with the names and births of her family including Jacob’s family. Jacob’s kids would set up homes in California, Kansas, Oklahoma and Washington, 3 stayed in Iowa, 3 are currently unknown.

Will Miller, a public photo shared on Ancestry

Will was born February 2, 1850 in Elkhart, Indiana, the 8th of 10 children of Jacob and Sarah Davis Miller. On the 1850 census, the Miller family was living on a farm, Will was just born. The 1860 census shows Sarah as a widow with her youngest 6 children living with her, an older daughter has married and moved to Iowa. By 1870 William was in Black Hawk County, Iowa with his mom and siblings. Will worked on a farm, was 20 years old and attended school sometime during the year. In 1880 Will lived with his mom age 66 and his niece Ellen Mitchell age 21. The next record for Will is not until 1920 when he was in Seattle Washington, 70 years old, a night watchman.

This move across the country seems a stretch but a residence source and then a death record in Seattle in 1930 confirm his move to the west coast. Will was born during the creation of the western states. When he lived in Iowa in 1870 the state was 20 years old. When he was in Seattle, Washington the state was about 20 years old with a population of 300,000. If his missing years 30 from 1890 to 1920 were spent moving west, he saw the country created and maybe lived in new states and kept moving further west.

Will didn’t marry and lived to age 80, he died in 1930. He died of heart disease his parent’s names are on his death record and he was cremated.

Adam was born in Indiana in 1863. In 1870 he was living on a farm in Bremer County, Iowa with his parents Peter and Esther, 5 brothers and a sister. Adam and his brother William were named after their uncles.

In 1887 Adam was in Kansas City, Jackson County, Missouri where on December 22 1887 he married Bridget McKeown. From 1889-1909 Kansas City phone books show Adam was a tailor, Bridget on a census form is also a tailor. Adam and Bridget had 2 daughters both born in Kansas City.

They moved to California and on the 11920 census this Miller family is in Los Angeles. Adam is a proprietor of a tailor shop. their neighbors are local and international born in Japan, Iowa, Wisconsin, Syria, Mexico, California, New York, Germany. Adam’s youngest daughter Jaquetta is 17 and at home, older daughter Mary is probably married. Adam lived until at least age 70, Bridget is a widow on the 1940 census living in Santa Monica with her daughter and granddaughter both named Jacquetta.

Both my grandfathers, Stanley Roose and Faber Miller, show up (at least once) in the Greene, Iowa newspaper for their good deeds.

Faber Miller: Good Samaritan to Half Frozen Pheasant in Iowa Recorder 1942 Jan 7 page 1 column 5.
A half frozen hen pheasant picked up this morning by Faber Miller Greene rural mail carrier on his route was brought to the local post office this morning. The bird apparently recovered from the warmth of the postoffice, was given food and released again. Local sportsmen are asking all who can to leave a little grain or crumbs where they can be picked up by the hungry pheasants. The heavy snow prevents the birds from securing food as well as having normal shelter.

Jacob Miller was born August 6, 1841 in Elkhart, Indiana the 3rd child of 9. The family farmed, the kids went to school. Jake’s dad died when he was 13 and soon after the family moved to Iowa close to where his older sister, now married, was living near Nashua, Iowa.

Jake stayed single. In his later years he lived with his bother Jame’s family, then with his nephew James Archard Miller and family. When his brother James D married Mary Ella Gaines, Jake is on the marriage record testifying to the bride and groom’s ‘competent age and condition’. On census records Jake is a farmer, a horse breeder and a horse trainer. He lived in Janesville, Bristow and Greene, Iowa and was a welcome guest in the Janesville Waverly area. On the 4th of July 1885. “Mr Jacob Miller was down from near Bristow to spend the 4th with his friends around Janesville. Jake is always a welcome guest in these parts.” 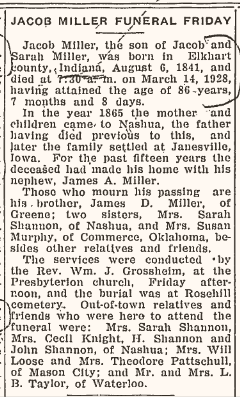 Henry was born in 1789 in Pennsylvania and is newly added as the father of Peter Miller b. 1827. Researching Peter in Waverly newspapers, he visited Canton, Stark County, Ohio a lot and in June of 1898 he visited with daughter in law Fiana Druckenbrod Miller, both were attending family reunions. It turned out the Stark, Ohio newspaper actually recorded Peter Miller’s visit and featured a full page article about the famous Miller family reunion with perhaps 500+ Millers attending. 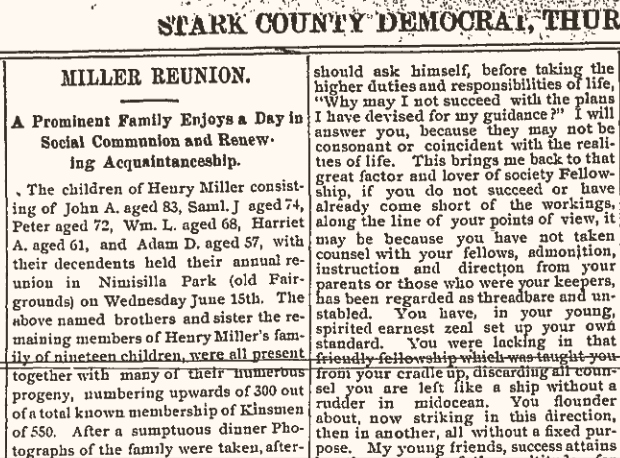 The article is in the Stark County (Ohio) Democrat newspaper of 1898 June 30, provided by Stark Library. https://starklibrary.org/home/genealogy/digital-archives/

Henry Miller was born about 1782 in Pennsylvania, probably Berks County and probably descended from parents or grandparents who arrived from Germany.  He married Elizabeth Fryberger, they moved to Ohio around 1810 and were pioneers in the area. Henry was a widow around 1834 and married again, he may have had 12 children total. An 1830 census shows him and his family in Stark, Ohio. Before 1850 only the heads of homes names were recorded so the 1830 census has Henry Miller and 9 other people identified by tick marks in an age and gender category. Henry is second from bottom on this list. There also an Ohio marriage record for Henry and Julia Essig Troxel, both widowed, they married October 4, 1835 in Stark, Ohio.

Update on Peter Miller: June 1898 Peter and daughter in law Fiana went to Stark County Ohio for family reunions. Fiana attended the Bair reunion, Peter attended the Miller reunion, the Miller reunion was in the newspaper and gives details on Peter’s father and siblings. Peter’s family is from Pennsylvania, originally Germany and his mom’s, possibly his dad’s family have a lot of history.

Peter Miller was born Feb 2, 1827 in Stark county, Ohio and lived in Canton, the county seat much of his life. At about age 40 he, his wife and 9 children moved to Bremer County, Iowa. They lived in a farm in La Fayette township. Peter died on August 25 of 1912 at age 85 in Amery, Wisconsin, he was living with his son William and family. Peter is buried in Andrews Cemetery outside Waverly, Iowa. Some of Peter’s life is documented in the Waverly newspapers of the time.

1892 Aug 25 page 5 of the Waverly Republican –https://is.gd/TofPAp.
Peter Miller is painting his house and barn on his farm in La Fayette and fixing up generally

1887 Mar 11 page 5 of the Waverly Democrat –https://is.gd/Y5sXr4.
Peter Miller living in LaFayette has a cow that is worth bragging about, It is twenty one years old and during her lifetime has given birth tp 19 splendid calves the last two being a pair of twins. And what is more she is still a good milker and promises yet to live many years.

Peter visited Canton, Ohio often, so did his wife Esther and their daughter in law Fiana. Peter happened to be in Canton for the funeral of President William McKinley

1901 August 22 page 5 of the Waverly Democrat –https://is.gd/JodKen
Peter Miller will leave Monday for a visit to his old home at Canton, Ohio. He will be gone about 6 weeks.

1901 October 3 page 5 of the Waverly Democrat –https://is.gd/ADVOwn.
Peter Miller returned Thursday morning from his visit at Canton, Ohio, the home of the late President. Mr Miller was present at his burial services, which he describes as being “grand beyond description”. 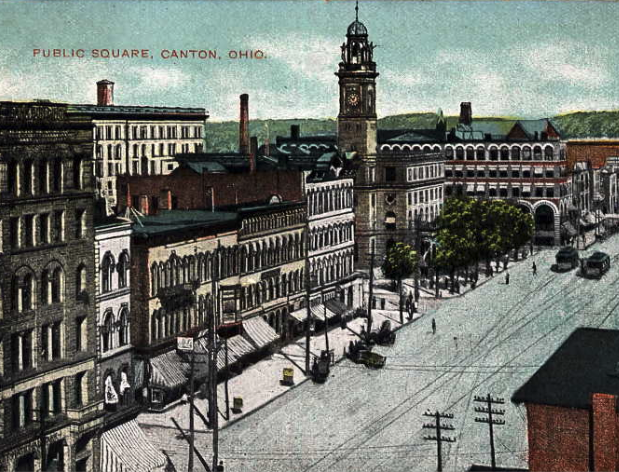 In 2015 I started recording  family history and was fascinated. I’m a beginner, this is my hobby: an informal website to document progress, track and judge sources … then imagine my ancestor’s lives. Kirstin Miller b. 1963

This work is licensed under a Creative Commons Attribution 4.0 International License.
Thrilled to share my findings, use as you like, facts provided are correct and current when posted, ancestor life stories are my interpretation,  Kirstin Miller.

Each life has its place
Blog at WordPress.com.