Snapshot of the parish record of their marriage, “July Anno 1596. William Plasse and Margerie Smith weare married the 19 day in Anno Domino” [?]. William and Margerie are last on this snapshot of a 2 page document image. 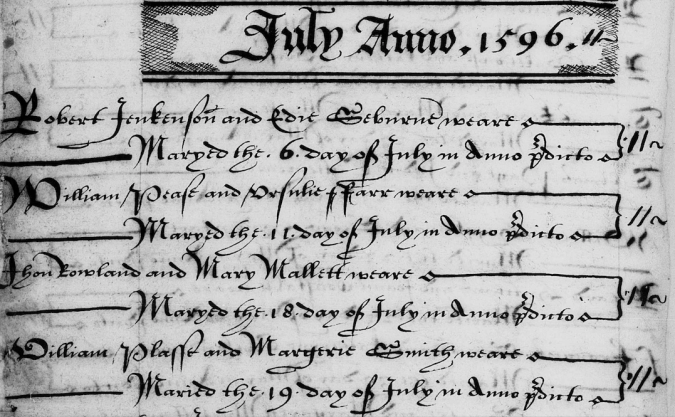 William was a widow in 1618 and married Phebe Manning, also a widow. In 1637 William and family sailed to America and settled in Salem, also known as Naumkeag. William was a gunsmith in London and also in Salem where his skills were highly valued in the new colony. When he requested 10 acres of land, he received it in May, 1637. “ Willm Plaise requested a ten acre lott and it is granted’.

William was 66 when he came to America, he lived 10 more years and stayed in Salem. He shared his gunsmith skills and tools with Richard Waters, 2nd wife Phebe’s son. In William’s estate papers an inventory included: one feather bed, two feather bolsters, one great Bible, one psalme book, one chest, and ‘tools that Richard Walters [Waters] hath’. William died in 1646 his burial place is unknown.