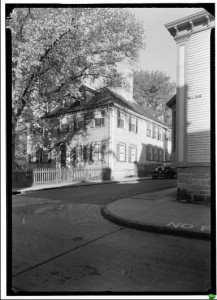 Godsgift was born on 27 Aug 1658 in Newport, Rhode Island, USA to Benedict (11th great uncle) and Damaris Westcott Arnold, the governor. Benedict Arnold who joined the British Army was her great grand nephew. Godsgift married Jireh Bull, their grandfathers William Arnold and Henry Bull were original Rhode Island settlers in the 1630s. Godsgift and Jireh lived in Newport, Rhode Island in a home still standing, now known as The Captain John Maudsley House. In 1952 it was discovered that the house was actually built by Jireh Bull. The August 27, 1952 Newport News tells the house’s history, I haven’t found the actual source. The Library of Congress has photos and floor plans of this house that Jireh started building in 1680. The house is still standing and privately owned today, at Wikipedia .

The photo is from early 1900s. Jireh began building in 1680.  At the Library of Congress: John Maudsley House, Other Title Jireh Bull House.