Oliver Angell 7th great grandpa on RootsMagic tree.
Oliver was born February 20, 1717, the 2nd of Hope and Lydia Olney Angell’s 7 children. On June 13, 1740 Oliver and Naomi Smith were married by Reverend Josiah Cotton in Providence, Rhode Island. Oliver and Naomi farmed and raised 7 children in Providence. Oliver was also a ‘cooper’ he made barrels, baskets and casks; a carpenter and a shoemaker. 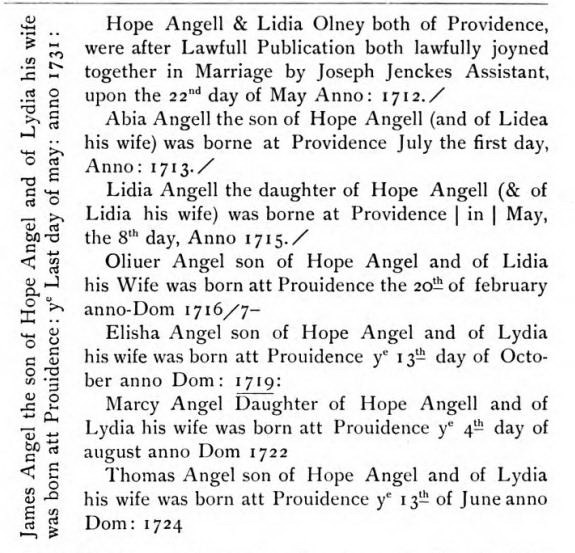 Oliver died on April 1, 1799, his wife Naomi died December 3, 1799 and their grand daughter Adah died October 9, 1799. These 3 Angells and 16 others are buried in the Rhode Island Hist. Cemetery North Providence #8, also known as the Hope Angell Lot, or the Oliver Angell Lot. This tiny cemetery has 19 burials, was originally on Angell farmland and is now in a residential area between two houses. If you’re related to Elizabeth Speedy Roose, you’re related to 17 of the 19 buried there, all but Elisha Angell’s 2 wives.

“Providence Gazette, April 6, 1799, p. 2:
At North-Providence, on the 1st inst. Mr. Oliver Angell, in the 83d year of his age, who sustained an unblemished character. As a citizen he was firm in the support of government; as a husband he was kind and affectionate; as a parent he taught his children the love of virtue in their early years, and by his example daily set before them, shewed that he had himself experienced the happy effects. Few who lived to his advanced age could say, as he did, that he was never sued at law, nor sued any person, but lived in peace with them all.”

This work is licensed under a Creative Commons Attribution 4.0 International License.
Thrilled to share my findings, use as you like, facts provided are correct and current when posted. Sources are provided. Most all that I use from HathiTrust, Archive.org, Library of Congress, New York Public Library Digital Collections, etc. are in the public domain, out of copyright. All that I use from Ancestry and FamilySearch are owned by them, not me.