Mary Swain was born December 5, 1841 in Lake, Illinois. She was the third child of Benjamin and Polly Howard Swain. When Mary’s dad Benjamin died her mom Polly remarried and the family moved to Chickasaw, Iowa. In Chickasaw on March 10, 1858 Mary married John Butler of New York. 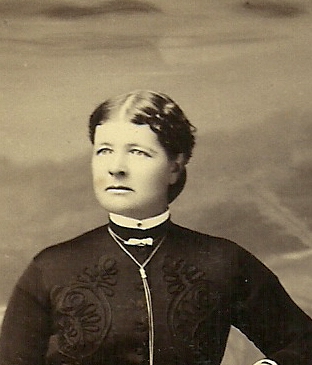 After the war Mary, John and their children were living in Pleasant Grove Iowa in 1870, Mary kept house, John farmed. In 1880 the family was in Wadena, Minnesota near Mary half brothers, the Montgomerys. In 1900 Mary and family were in Lane, Oregon living on a farm in Richardson Township on the east edge of Oregon, near Siuslaw National Forest. Some of Mary’s Gaines family cousins were already in the area. Mary died in 1905, John in 1923 both are buried in Franklin Cemetery in Franklin, Lane County, Oregon.
Sources

In 2015 I started recording  family history and was fascinated. I’m a beginner, this is my hobby: an informal website to document progress, track and judge sources … then imagine my ancestor’s lives. Kirstin Miller b. 1963

This work is licensed under a Creative Commons Attribution 4.0 International License.
Thrilled to share my findings, use as you like, facts provided are correct and current when posted, ancestor life stories are my interpretation,  Kirstin Miller.