Sarah Davis was born in Virginia, probably to Pleasant and Sarah Horton Davis, the 6th of 7 kids. On April 18, 1833 in Jackson, Ohio Sarah married Jacob Miller. Sarah and Jacob had one child Mary, in Ohio, then moved to Elkhart, Indiana. They farmed and had 9 more kids. 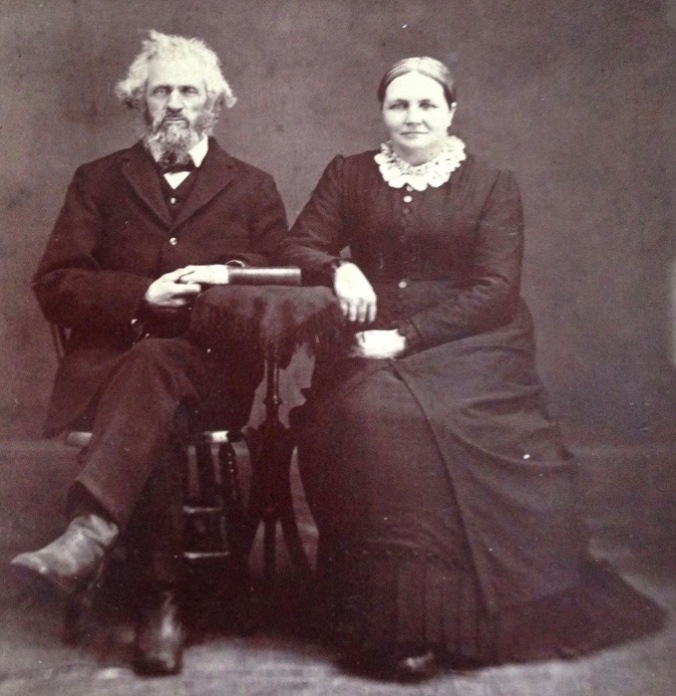 Jacob died in 1854 same year his 9th child was born. In 1860 Sarah was 46 years old and head of house on the census, living on a farm with 6 of her children. Jake is the oldest, he’s 18 and farms. James, Sarah, Will, Susan and John are 14 to 8 years old, they attend school. The oldest daughter Mary had married Moses Mitchell and moved to Nashua, Iowa. Son Pleasant, named after his grandpa, was in Sutter, California, a miner. Two children Horton and Alexander are still a mystery, not a lot of records. Maybe son Horton, named for his uncle, had joined the Confederate Army in Tennessee, maybe son Andrew was on his own and married with a family in Indiana.

On the 1870 and 1880 census Sarah and children have moved to Washington Township, Black Hawk County, Iowa, near Janesville and the Cedar River. On the 1880 census Sarah had real estate valued at $1700. Her sons Jacob and James were farmers, younger kids were at school. Her neighbors were farmers, carpenters, a physician, a teacher and day laborers; born in New York, California, England, Rhode Island, Wisconsin and Iowa.

Sarah died April 8, 1888 and is buried at Oakland Cemetery in Janesville, Iowa. She is near her son James’s in-laws the Gaines family. Son James married Mary Ella Gaines, their son William is the dad of Faber who married Gladys.