Casjen was born February 5, 1834. He was from Lower Saxony Germany near Hamburg and Bremen, close to the Netherlands, and Amsterdam. Casjen married Kuna Janssen in Germany. In 1883 Casjen was 49, he and Kuna had 5 kids: Yevkea, Enno, Gerd, Entje, Hilka and the whole family left Germany for America. 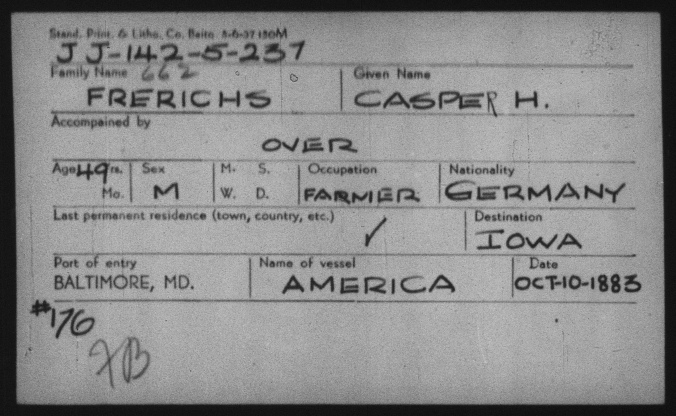 They sailed on the ship, America, stopped at the New York Harbor then sailed on to Baltimore. From Baltimore, Casjen and family went directly to Butler County, Iowa just over 1,000 miles. Casjen stayed in Butler County, near Parkersburg in Albion township. HIs children stayed in same area, Gerd and Yevkea died shortly after arriving in Iowa, son Enno, daughters Entje and Hilka married, had children and farmed. When Casjen died at age 59, in 1893 he had 3 grandchildren including Mary Frerichs Roose, mom of Stanley Roose.

Casjen and wife Kuna are buried in Oak Hill Cemetery in Parkersburg. They share a headstone, at the bottom are many words inscribed, by hand, in the German language, something like -Not mine, -, my Savior I found, and I have also in part – . About 10 yards away Martin and Mary Walters Wisbar are buried, parents of Lena who married Johan Roose. Lena and Johann’s son was George Roose who married Mary Frerichs, their son was Stanley Roose.