Asa Angell was the 4th child of Israel and Martha Angell, born  August  24, 1771 in Providence, Rhode Island. Asa grew up during the American Revolution, his dad was a Colonel in the 2nd Rhode Island Regiment  and probably came home with stories of the war.

Asa married Cynthia Hill in 1794 and they moved to New Berlin NY. From the Genealogy of Thomas Angell book, “Asa, Abner and Israel Angell, sons of Col. Israel, went to the State of New York, and settled in the town of New Berlin, Chenango Co., where they purchased farms. A cousin of theirs, who has visited them, reports that their descendants are numerous. We are told that the family of Dexter Angell have in their possession the gold medal awarded by Gen. Lafayette, to Col. Israel Angell. We know less of the descendants of Asa, than of either of the other brothers.” Asa’s son Dexter may have had his grandpa’s gold medals for awhile, with him in Indiana and New York, today they’re at the Rhode Island Historical Society.

Asa and Cynthia stayed in New Berlin and had 8 children. Asas was a farmer and a cooper- he made big wooden barrels, casks, kegs. Asa’s children Betsy, Lewis and Henry all stayed in the NY area, Adeline died young. Oldest son Dexter Angell went further west, to Indiana. Two of Dexter’s children, Charles and Delia, went to Iowa where their aunt, Asa’s sister, Mehitable Angell Wilkinson was living. Delia married William Flood they had a son Asa and are the great grandparents of Elizabeth Speedy. 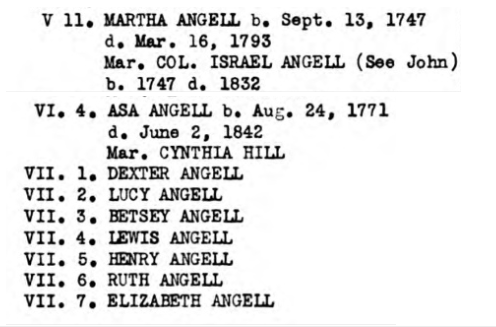