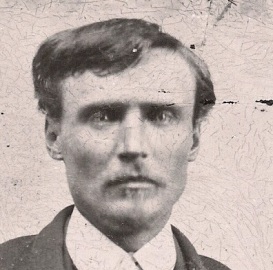 Pleasant Davis was born in Ohio on November 30, 1844. He was one of 13 kids of Horton and Florida Russell Davis. Horton’s dad, Pleasant’s grandpa was Pleasant Davis married to Sarah Horton, both of Virginia. Names ‘Pleasant’ and ‘Horton’ were carried on through the generations as first or middle names for sons. One ‘Pleasant’ went by Plez. This Pleasant married Huldah England on February 17, 1868 in Ohio. Soon after Pleasant’s family and older sister Sarah Davis Martin and her family left Ohio for Illinois where Pleasant lived for a few years. Pleasant’s other siblings were in Iowa, North Dakota and sister Martha, in photo, went all the way to Oregon. By 1883 Pleasant was in Union, Iowa with his dad, mom and some siblings. Pleasant and Florina’s son Clement Pleasant Davis was born in Union and 4 Davis daughters Florina, Mary, Sarah and Victoria were all married in Iowa.

Florina died around 1888 and Pleasant with his younger kids, they all headed for the Cherokee Nation where the 1889 Indian (land) Appropriations Act gave up land for purchase and President Harrison proclaimed “unassigned lands were open for settlement under much less stringent rules”. Today the area is north eastern Oklahoma, it was called ‘Cherokee Nation’ on census forms from about 1840? until Oklahoma became a state in 1907.

Pleasant’s family lived in Bluejacket where he farmed. His sons Horton and Warren helped on the farm, the younger kids were in school. Bluejacket is 50 miles north east of Tulsa with a population of about 300 today. Pleasant’s daughters Florina and Victoria with their families joined their dad in Bluejacket, Oklahoma. Pleasant died at age 78 on April 3, 1924 and is buried at Bluejacket Cemetery.

This work is licensed under a Creative Commons Attribution 4.0 International License.
Thrilled to share my findings, use as you like, facts provided are correct and current when posted. Sources are provided. Most all that I use from HathiTrust, Archive.org, Library of Congress, New York Public Library Digital Collections, etc. are in the public domain, out of copyright. All that I use from Ancestry and FamilySearch are owned by them, not me.