John Field b. 1616 in Yorkshire, England to William and Jane Sotwell Field. John Field was in Providence, Rhode Island before August 1637 and was one of the young crowd. He and his young crowd were looking for the same rights as the older settlers: Roger Williams, Thomas Olney, William Arnold, etc. So the old and young worked together and created the 1637 Providence Civil Compact. Pages of details here, summarized here.

“We, whose names are hereunder, desirous to inhabit in the town of Providence, do promise to subject ourselves in active or passive obedience to all such orders or agreements as shall be made for public good of our body, in an orderly way, by the major assent of the present inhabitants, master of families, incorporated together into a town fellowship, and others whom they shall admit unto them only in civil things.”

By 1640 citizens of Providence needed a more precise civil compact so a committee of representatives (Robert Coles, Chad Browne, William Harris, John Warner) met and wrote up the 1640 Providence Agreement. 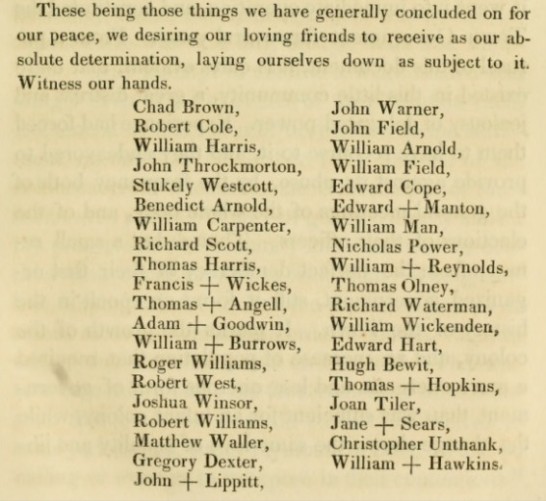 The representatives took their task seriously “in all differences amongst us, being so betrusted, we have seriously and carefully endeavored to weigh and consider all these differences, being desirous to bring them to unity and peace.”

They were modest: “although our abilities are far short in the due examination of such weighty matters, we have gone the fairest and equallest way to produce our peace.” Page 40 of Annals of the Town of Providence.

John Field stayed involved in town services with meetings at his home. “Meet at John Fields home: Ordred yt a declaration be set up under the hand of ye Towne Clerke to give notice to all ye Creaditors of John Smith, (deceased) to repaire on Munday ye 19th: instant, unto the house of John ffield about 9: or 10: of the Clock there to receive theire dues of ye said Estate.” Volume 6, page 117 of The Early Records of the Town of Providence.